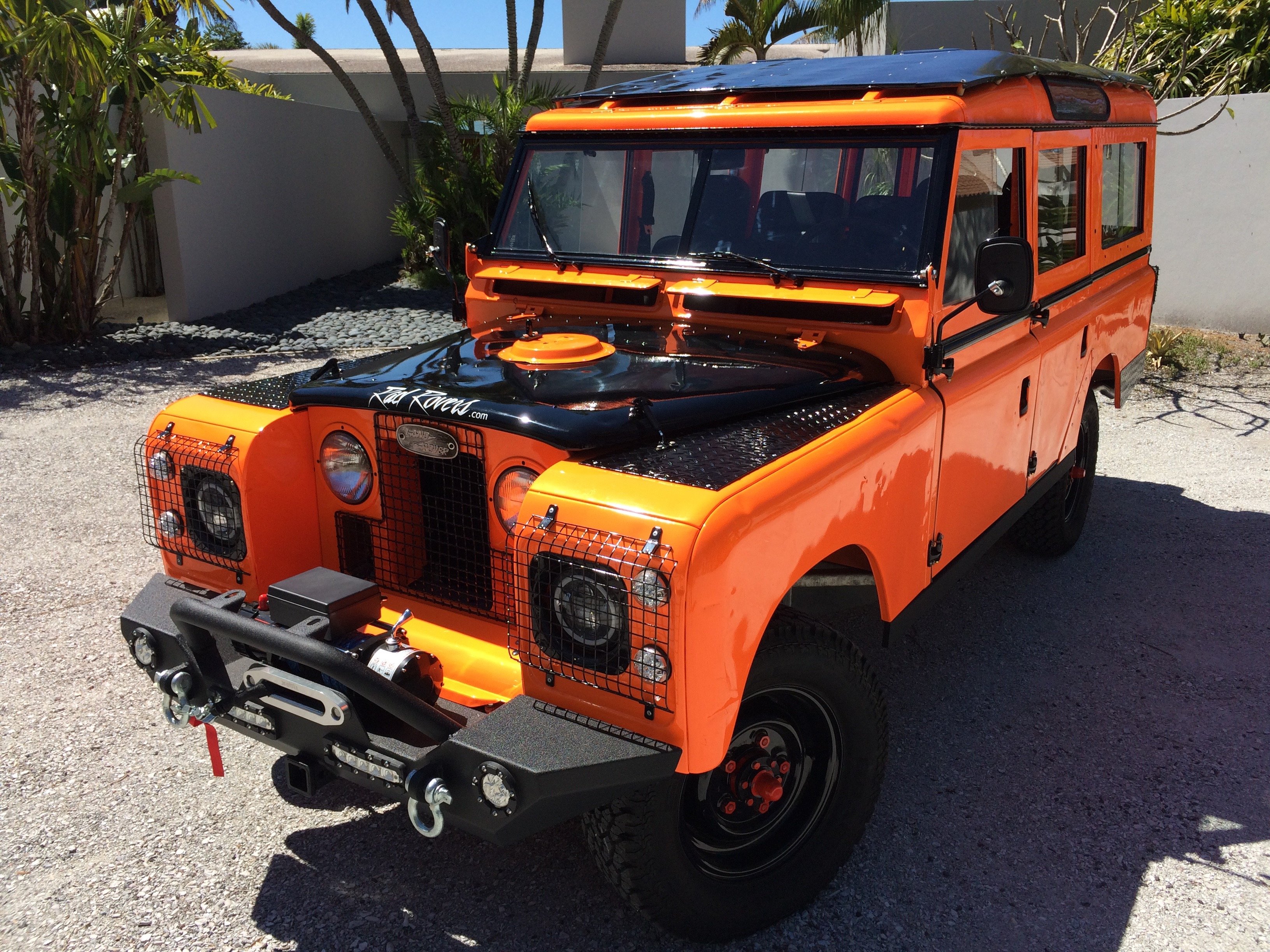 Our latest build by RAD ROVERS

Rescue had obviously lived a brutal life to say the least  When we bought it in March 2016, it was a total mess.  It looked like hell and we felt bad for it in a way but also proud to see how well it held up under the abuse it was given.  Arguably it was loved a little to much, but also obviously road hard and put away carelessly. The easy choice would have been to strip it for parts, but thats not what we like to do here at RAD ROVERS. As our mission statement states, we Restore, Revive, Rebuild. So, we started in on it.

Rescue was a special case.  We felt that if any land rover deserved another shot, it was this one. As with all our builds, we strip it down to the ground and assess what we have to work with… not much in this instance.

Step 3: get down and dirty

The workload was immense, to put it mildly.

Separating the big bulky parts one after another, whittling it down peace by peace like  Russian nesting doll down to the smallest screw. We found that in the end, it was necessary to replace roughly 70% of this truck with brand new parts.

Our general plan of attack for each build is to;

-strip the Land Rover down

– send out everything individually to a media blaster who uses a product called Black Beauty for blasting everything down to the bare perfect mettle.  (Yes this is a great product for aluminum, not damaging)

– then its chop and weld if necessary

–  then off to the powder coaters

– After powder coating, its time for reassembly.

Demolition is easy,  reassembly takes lots of patents and finesse.

–  Fuel tank and entire fuel system through the carburetor

–   Steering was a right hand drive and we converted to left hand drive.  With that came new; tie rods and ends, relay, swivel balls, and all the usual bearings and race bearings and lip seals.

–   Pulled apart and reseals the transition

and thats really in a nutshell…

Everything else was mostly the painstaking job of working with damaged, but not bad enough to discard, parts

Reusing original parts were few and or we made sure to reinforce structural integral parts.

And because we do all powder coated parts, we are not allowed to cover over damaged mettles before the powder coating ovens, so what you see is what you get.  We do NOT mask over imperfections let alone rust spots with body fillers and fare it over.  We would not be able to cheat you, nor would we want to.

We chose the color scheme from the US Coast Guard rescue teams.

The bright orange and black we associated with  Rescue

Being big fans of the USCG, and how tough, heroic and brave those guys are, we wanted to make Rescues style portray that as well in honor of them.

Plus, after doing some quick research, found that Land Rover also has a line of orange and black rovers overseas so we tried to mimic them as well to keep it in line with genuine land rover style.

We like the little miner dings and bumps and scratches.  The character and charm adds to the truck and tells a story each one that should be remembered, not forgotten and masked over. The weather beaten, well used land rover is to us,  beautiful.

Two years later and we present to you

Thank you for your interest,

Hope you enjoy it. 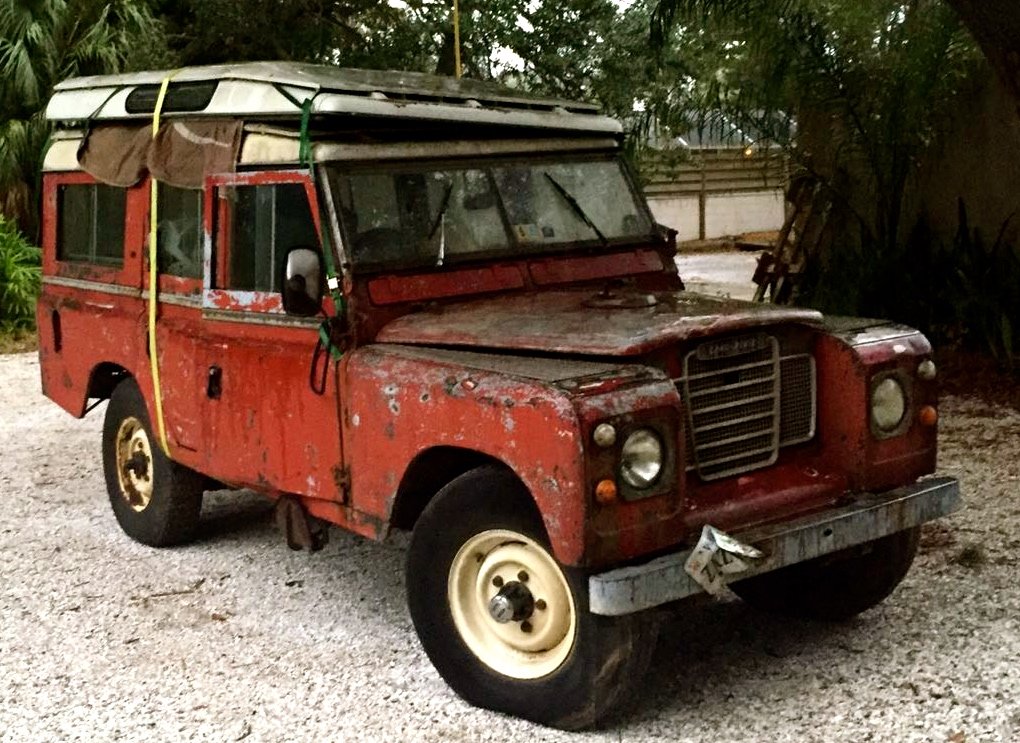 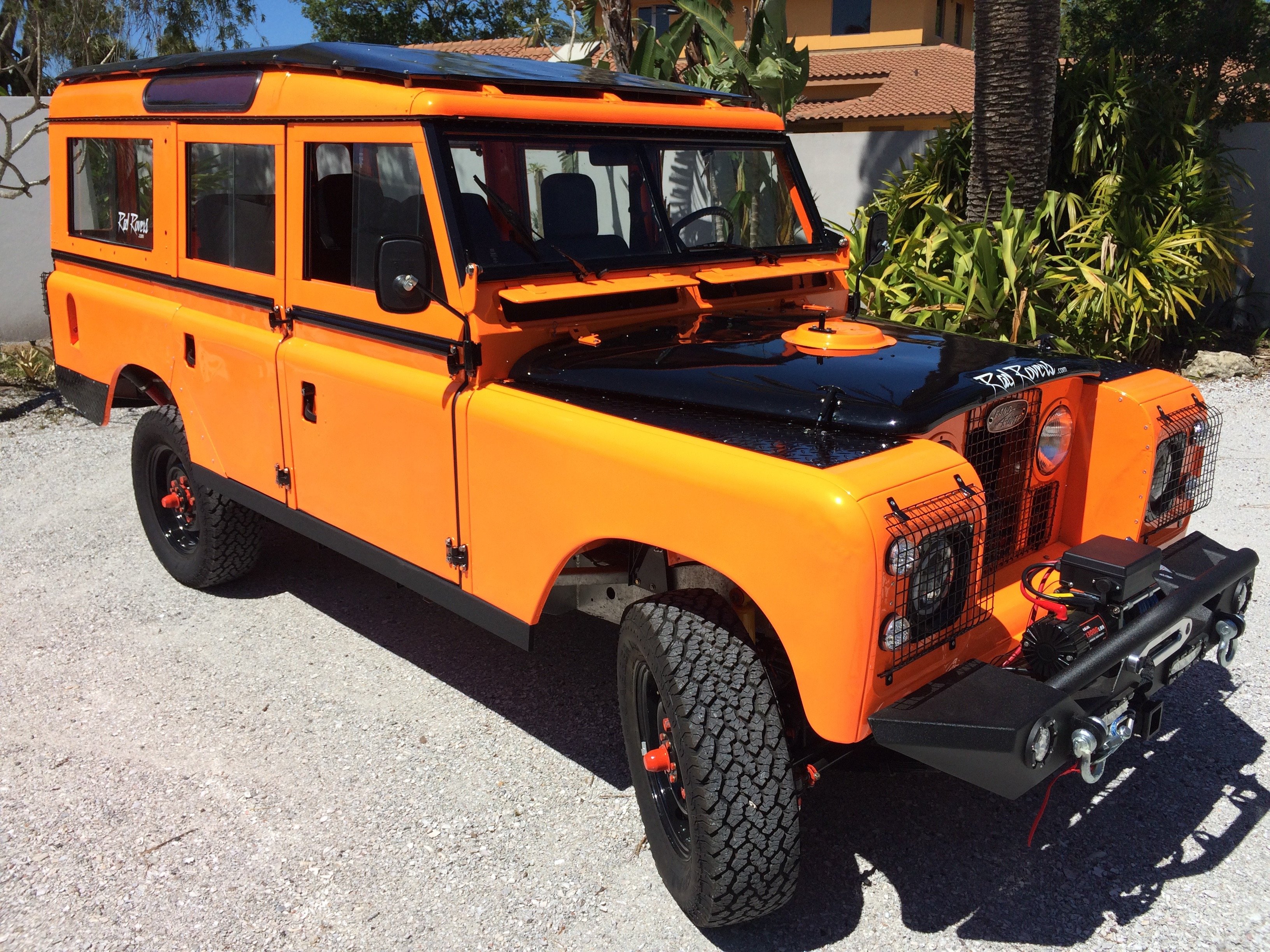 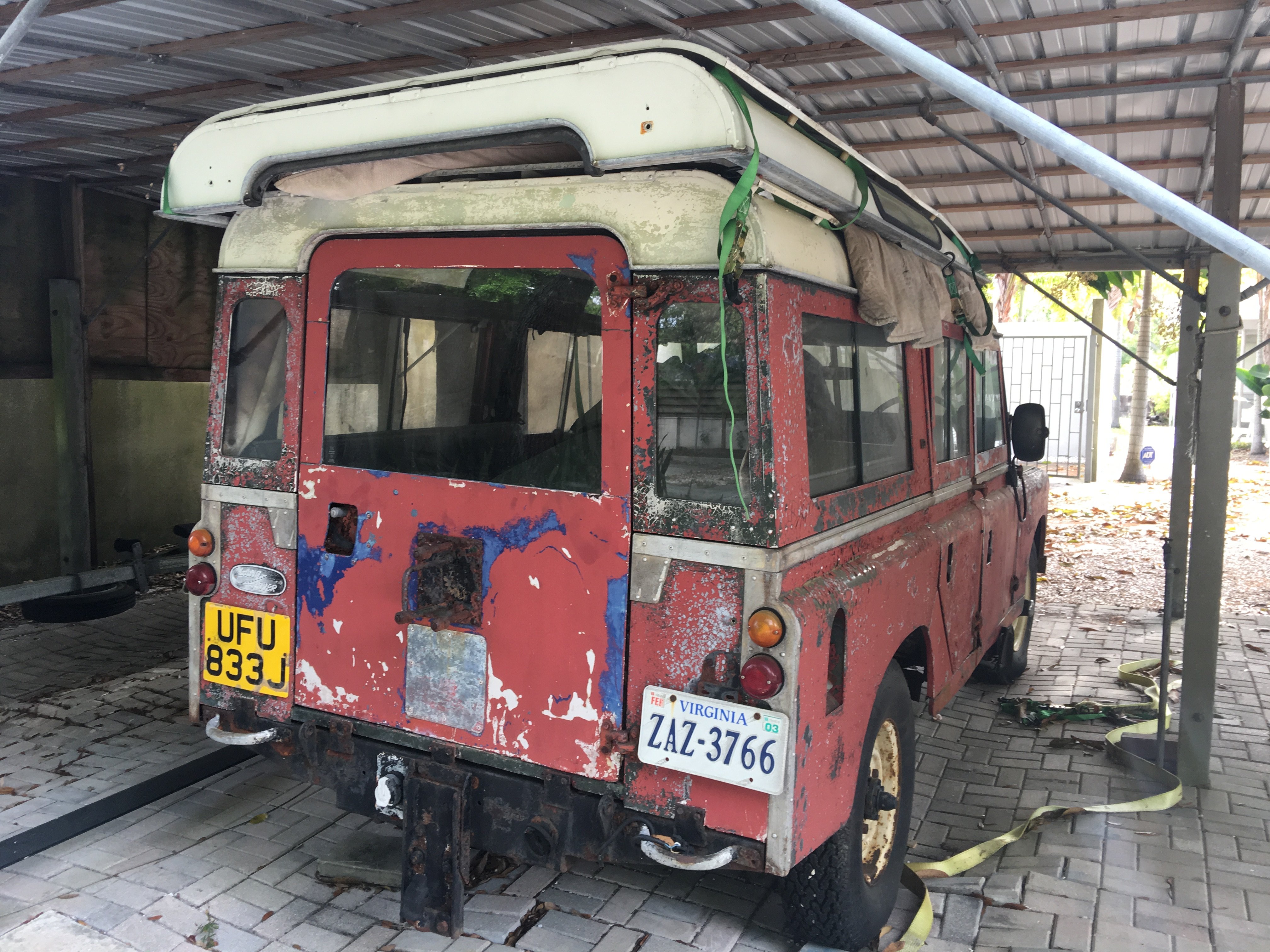 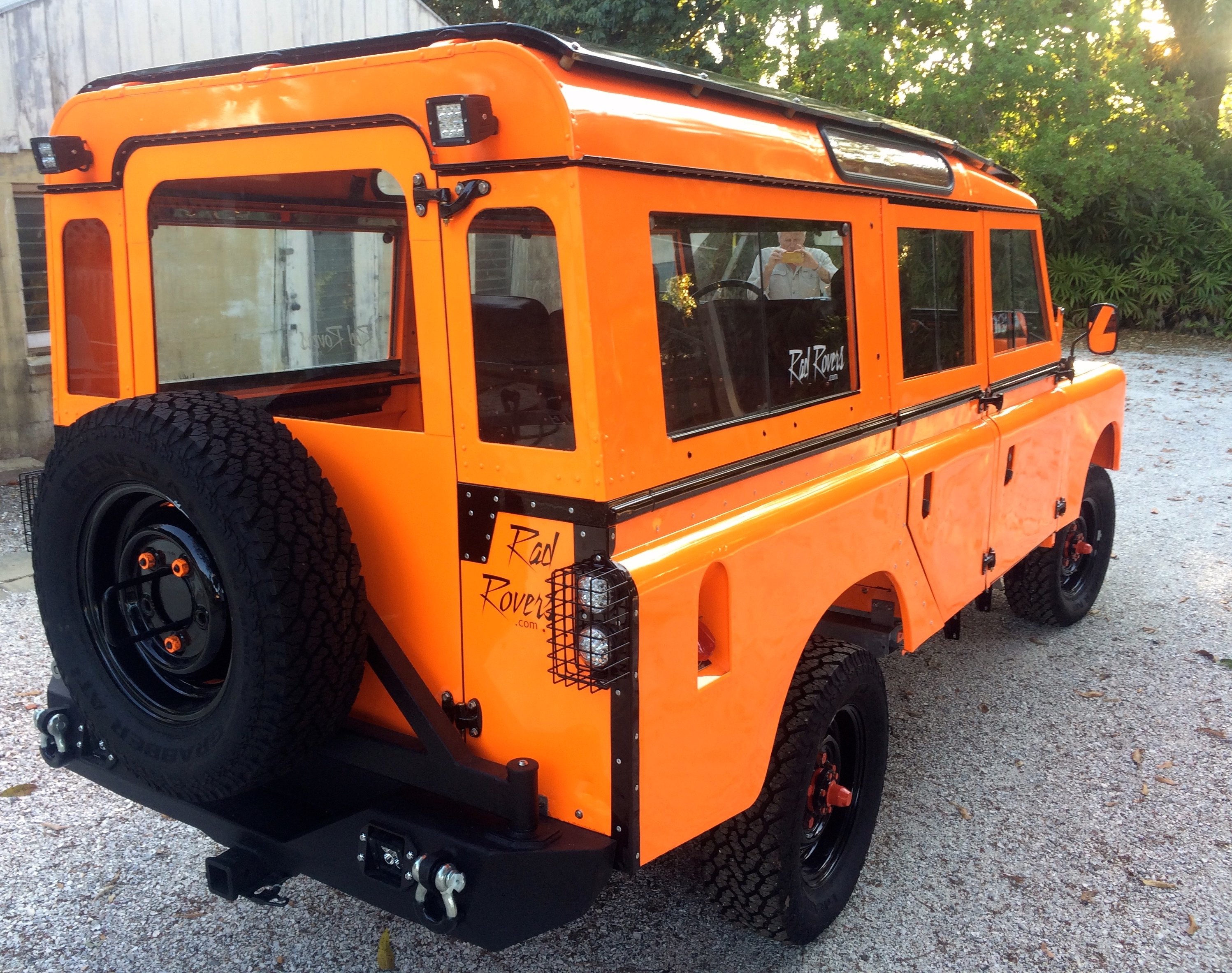